Of Men and Animation

The first event of the cultural orientation programme took place on 26 October with a group of about 30 refugees and asylum seekers from nine nationalities. Our special guests Vessela, Giovanni and Dimata from Compote Collective had accepted our invitation to tell the participants in the workshop about animation in Bulgaria, the messages behind graffiti and comic strips, the freedom of expression which they allow for and their social impact. 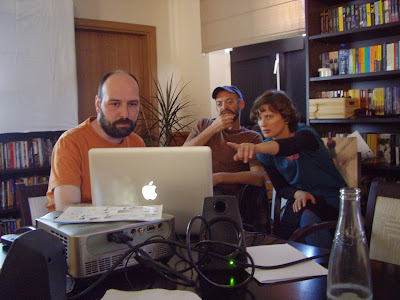 The programme started with the screening of the documentary animation movie “Father”. The movie follows the traumatic memories that five grown-up children have of their relationships with their fathers during communist times. No doubt we were interested in the way this movie would be perceived by people who traditionally receive most personal support from their families. Fila from * summarized that fathers are often seen as strangers because it is the mother who is closer to the children. Zaid from identified his own father with a wolf, just like the fathers featured in the movie.

In its turn, graffiti constructed a bridge across the dividing walls on which surfaces it emerges so often. The wall between and , the Berlin Wall and the border wall to-be between and , serve as divides, but also as platforms for the expression of civil and social positions. Haqim from took the floor, and showed us and told us about the graffiti which appeared on, and filled with discontent the after the events of the Arab Spring in 2011.

Giovanni explained about some European and Arab comic books, about the role of directions for the storyline and about the fact that in Arab comic strips good characters come from right to left and in European ones from left to right. Dimata on his part presented his own comic strip “How Mr. Black Became Blue”. The story behind this comic strip is very close to the experiences of our participants, in that it illustrates the red tape challenges a migrant encounters on his or her way to integration in the host society.

At the end of the first event, the participants drew a story of three parts, consisting of elements from the past, present and future. One can read in the final paintings hope for a better life, sorrow from past experiences, joy in refuge, the fragments of a love story, the spark which gives us hope in the coming good. 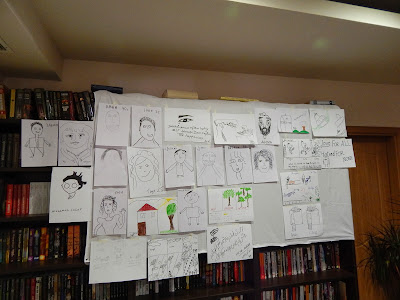