Stefan Ivanov: “Altruism is a sign of constructive sociality.”

Among piles of heavy books, contemporary and classic, Bulgarian and foreign, ours and others’, the fifth event of the cultural orientation programme for refugees and asylum seekers took place. Our special guest, Stefan Ivanov, introduced our participants into the so close and at the same time linguistically so far from them Bulgarian literature. He was assisted in his attempt to find common ground between local and “foreign” cultures by the unrivaled Arabic language translators Aziz Tash and Maya Tzenova. 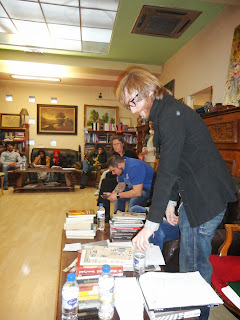 1. Could you shortly introduce yourself?

I write. I have written poetry books, but also prose, I’m the author of dramatic texts, I work as a journalist too. I’m doing a PhD in aesthetics.

2. What is your previous contact with refugees and asylum seekers?

I have participated in initiatives of “Friends of Refugees” as a donor and as a volunteer. I have initiated my own volunteer activities: I have brought food and clothes, together with friends, to the camp in Vrazhdebna.

3. Did you have prior expectations about the event and the participants? If yes, what where they?

I was worried about boring or overwhelming the listeners with facts and stories which were far from their literary context and because of that might seem incomprehensible to them. I did not want to waste their time. I expected to be on pins and needles, but it turned out that it was all very pleasant and the time passed extremely quickly. I was happy with the interest, smiles and questions I received.

4. Was there something which surprised you or made a strong impression on you at the event and did you take something from this experience?

I left with the poem, made of the words which I had asked them to write in the beginning of our conversation. On one side of the notes there is a happy word or expression, and on the other there is a word for unhappiness. I will keep these words. For a long time.

5. Would you like to add something or to address the participants, the organizers, and the blog readers?

I would like to say that sympathy, compassion, and empathy are extremely precious and important and they should be tirelessly educated and cultivated so that such insanities, which turn people into refugees, should not be reproduced. And also so that we treat refugees in a humane way. The ability of men to sympathize with other people’s feelings and thoughts is an achievable good. Altruism is a sign of well-meant, constructive sociality.

We would like to thank Stefan, Aziz and Maya for the unforgettable atmosphere which they managed to create thanks to their knowledge, stories and charisma on that Sunday afternoon. You can read the poem which Stefan wrote during the event, based on the "words written" by the refugees, in the article about the past event.
Изпращане по имейлПубликувайте в блога си!Споделяне в TwitterСподеляне във FacebookСподеляне в Pinterest
Етикети: blitzen