The Magician Writer, the Refugee Reader

On March 2, one of the most cosy reading places in Sofia, Hot Spot Books & Art, hosted the literary event of the cultural orientation programme for refugees and asylum seekers, which was attended by 20 refugees and asylum seekers from six countries: , , , , and . For four hours they immersed in the world of Bulgarian contemporary prose and the translation flows between Bulgaria and the Middle East. The special guests at this event were Stefan Ivanov, a poet and a writer, and the renowned translators (not only) from Arabic into Bulgarian, Aziz Tash and Maya Tzenova. 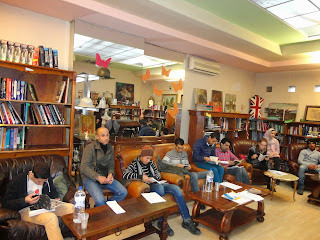 Stefan opened the event reading three of his poems, translated in Arabic by Maya and Aziz. He presented “Words written by 112 persons”, a poem composed during a theatre performance at Sfumato Theatre, “Yours” and “Tasks for the Day”, raising the universal issues of happiness, love and death. Further, he challenged the participants with a game. He took a white piece of paper and said “on each of these two sides, please, write a word which in your view relates to happiness and unhappiness. Can you see how thin this piece of paper is? So thin is the fine line between happiness and unhappiness and you know this even better than me”.

He went on to give a brief description of contemporary Bulgarian literature, adding his recommendations on topics and works. Georgi Gospodinov and Alek Popov were given as examples of popular contemporary writers, who write about the fragmentary transition era, and whose works – owing to their familiarity in topics – are translated in many European and Arab countries. 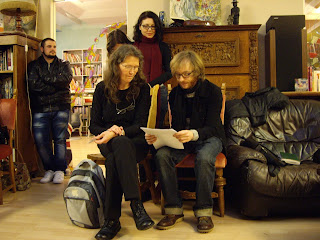 The participants were interested in Arabic books that were translated into Bulgarian. This was the part where Maya and Aziz intervened. A vivid discussion on the translated Arabic literary works in Bulgaria was stirred. Maya received a special request from Karar* from Syria to send him the poem “Rain”, by the Iraqi poet Badr Shakir as-Sayyab, which was translated by Maya into Bulgarian. In the end Mariam, a young girl from , read an essay on one of her favourite poems, followed by one of her own poems, dedicated to her father. We Bulgarians, ignorant of the depths of the Arabic language, could only judge the quality of the poem by the speechlessness of those who understood.

To put an end to the event, Stefan, with the translation assistance of Maya, read the poem he composed during the day: “Words written by 22 refugees”.