The following event of the cultural orientation programme for refugees and asylum seekers met us with the optimistic and energetic dancer and folk dance choreographer Georgi Panayotov. He was the driving force behind the event devoted to music and dances, which brought people from different nationalities into a unified entity, into a circle dance called horo. Hereby his impressions from the interesting multicultural day: 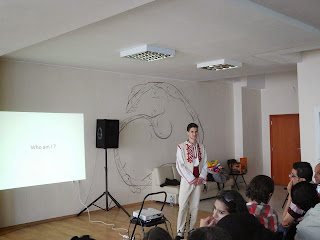 1. Could you shortly introduce yourself?

My name is Georgi Panayotov and I have been doing folk dances for 15 years already. I teach folk dances to children and adults and organize events for foreigners who are interested in our folklore.

2. What is your previous contact with refugees and asylum seekers?

I hadn’t had direct contact with refugees and asylum seekers before the event.

3. Did you have prior expectations about the event and the participants? If yes, what where they?

I expected to find similar moves, dances and music. This is what actually happened. It turned out that we have many common elements both in music and dances. I enjoyed learning a couple of new dances coming from different cultures.

4. Was there something which surprised you or made a strong impression on you at the event and did you take something from this experience?

I found it interesting to notice that it is men who are mainly dancing, in comparison to women who do not participate actively. In it is the opposite: women dance more often than men.

5. Would you like to add something or to address the participants, the organizers, and the blog readers?

I would like to thank the organizers and the participants that we were all very open so that such a great event with peoples’ dances and music could take place. We keep finding out every day that we become much closer and that we look alike all the more…

Very often after the end of the events we come to the conclusion that there are much more similarities than differences between people who are being visually recognized as foreign and the locals. Dances bring closer, they create a community. Thank you Georgi for reminding us of this in such an entertaining and successful way!
Изпращане по имейлПубликувайте в блога си!Споделяне в TwitterСподеляне във FacebookСподеляне в Pinterest
Етикети: blitzen