Simple Steps for All


The 7th event of the cultural orientation programme for asylum seekers and refugees from , , , , and took place on 25 May in Montfiz dance school, under the guidance of the special guest at the event, the dancer and choreographer in folklore dances Georgi Panayotov, from folk dance school “Shtiglets Horotropets”. 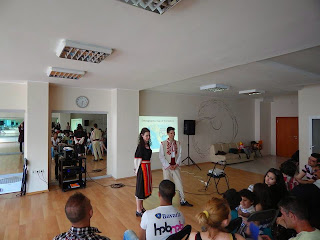 Georgi started the afternoon with a short presentation about himself in the context of his experience in folklore dances and went on to tell about the seven ethnographic regions with their characteristic costumes and dances. The map of the ethnographic regions proved time and again that culture does not tolerate state borders, but manifests itself in a unique flow, layered and enriched by each people’s journey within the geographical space. In the same way, to no surprise, the participants recognized elements from their own traditional dances in the performed moves and steps.

On their part the stories about the Dobrudzha, Rhodopi and Pirin folkore regions intrigued the audience with explanations of the typical body positions and grips which are believed to reflect the everyday life and habitual activities of the residents of the respective regions. In addition to these stories, the participants were interested in the guest’s costume, and asked if people still dressed in this way, where they could watch folklore dance festivals and obviously looked forward to showing their own dances. 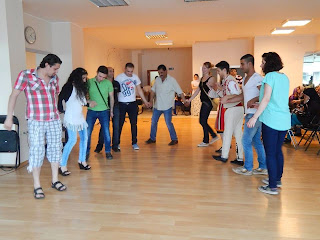 From them in return we learned that in there are folklore dance schools and that for all present nationalities folklore dances are an indispensable part of weddings and festive occasions. Georgi performed and taught the group the straightforward Thracian horo (traditional round dance), Daychovo horo, rachenitsa, “the wide nine” which is typically performed at Bulgarian weddings, as well as the horo which is traditionally danced at New Year’s Eve. From the participants we learned a couple of variations of dabke (a typical Arabic horo), the Kurdish horo known as “rasku”, as well as dances from : atang (a dance from the North) and qataghani (a dance from the South). Only the simple or straightforward dance, being common to all ethnographic regions, turned out to unite all people from different nationalities. 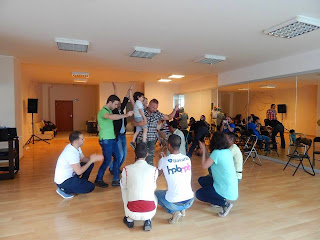 The dance marathon lasted for more than three hours, after which the heroes were all tired. The participants did not find it important to only learn more about Bulgarian folklore and culture. They shared that they learned a lot about one another. In the end, it did not matter whether we danced Arabic, Kurdish, Afghan or Bulgarian dances. No one gave up on following the steps which divided and united us in the rhythm of our mutual existence.